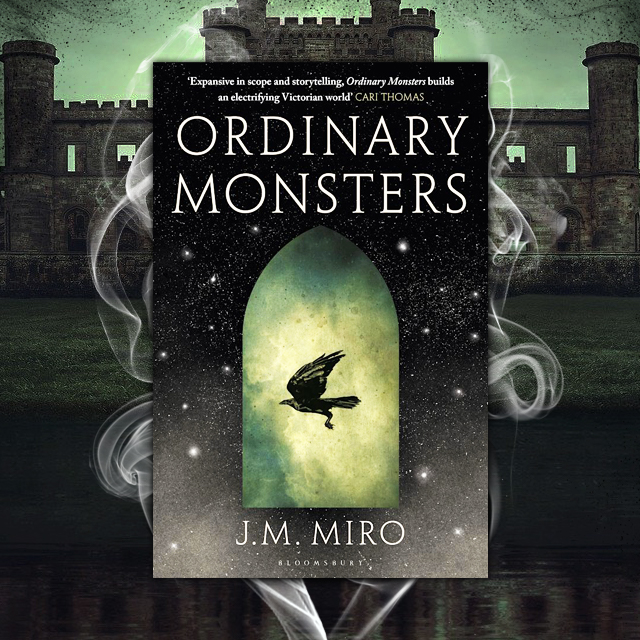 Ordinary Monsters is the scintillating debut novel from J.M. Miro. The book was released only a month ago, but has already garnered enough excitement to make it one of the must-read books of 2022.

Billed as the first part of the Talents trilogy, the story ranges from nineteenth century London through to Tokyo and Mississippi, before rounding back to Scotland for an explosive finish.

For years, the Cairndale Institute has sought to draw children with certain talents to their facility outside Edinburgh. There, they are schooled and protected from a world that would never understand them, all under the watchful eye of Henry Berghast and his team of enigmatic teachers.

Recently recruited by the institute, Alice Quick finds herself in Natchez, Mississippi, tasked with locating a young man with extraordinary healing abilities. Accompanied by Frank Coulton, the pair manage to rescue the boy from being buried alive by a superstitious sheriff, though the group is forced to make a hasty getaway when the escape doesn’t go quite as planned.

Alice is sceptical when Coulton reveals that they’re under threat from a mysterious outsider, and instructs her to go alone in search of their second charge while he accompanies the first back to London. Scepticism gives way to terror, however, when she learns first-hand the nature of the man that hunts them, and realises that much of what she’s taken for fantasy is more frighteningly real than she could have imagined.

For Cairndale is more than just a school for the gifted.

Buried at its heart is a terrifying secret encompassing life and death; the undoing of which could spell the end of the world. Alice would do well to be afraid of the man who dogs her return to the institute – a man wreathed in soot and darkness, who seems hellbent on taking the child she travels with. More so the thing that travels in his wake; a creature of blackest nightmare, one that would see Cairndale and everyone in it torn down in fire and bloody ruin.

This book is compulsive. That isn’t a bad thing, until you find yourself dipping in at odd hours of the day while your work lies forgotten. At over 600 pages, Ordinary Monsters is one of those gloriously meaty door stoppers; a book packed so full of story that the sheer weight of it is enough to make your greedy little reader’s heart thrill each time you pick it up.

From the foggy streets of London to the brooding grounds of Cairndale, there’s a dark atmosphere throughout this book that lends each page a sense of mystery and danger.

The story itself crackles with invention, served with more than enough flair to set it apart from its peers. You’d be forgiven if the synopsis calls to mind Ransom Riggs’ Peculiar books, but it would be a mistake to expect something similar here. I thought I’d seen this story before, and was pleasantly surprised to find I hadn’t.

You know you’re onto something good when the action kicks in and you find yourself hunched over the page with your heart in your throat, terrified that something is going to happen to your favourite characters. Balancing a compelling story with a captivating cast can’t be easy, but Miro handles it like it’s the easiest thing in the world, delivering a novel that’s as exciting as it is unforgettable. One can only hope the next instalment lands on our shelves sooner rather than later.