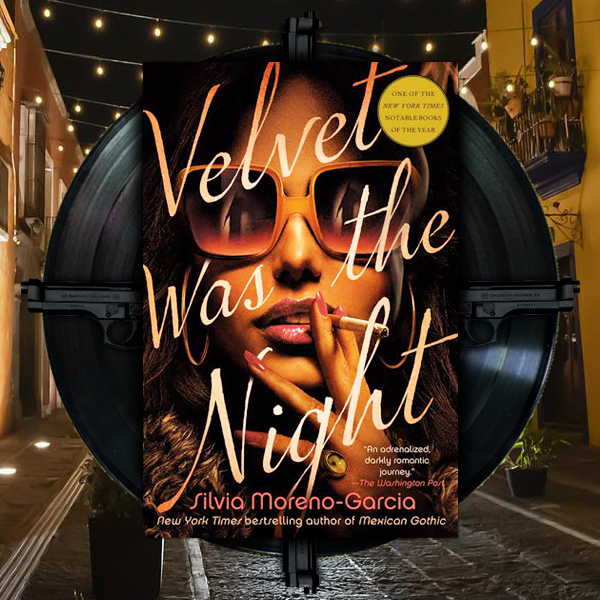 Silvia Moreno-Garcia has written seven novels and a small army of short fiction in the space of ten years. The most famous of these is probably Mexican Gothic, a novel praised for its atmosphere and gothic concepts, which nabbed her the 2021 August Derleth Award for Best Horror Novel. She’s also a Washington Post columnist, the editor of numerous anthologies, and the publisher of micro-press Innsmouth Free Press. If Mae West was the hardest working woman in show business, I think a similar title might safely be bestowed on the indomitable Ms. Moreno-Garcia.

I can’t say I’m a big fan of noir, so I was a little sceptical when a friend recommended her latest book, Velvet Was the Night. The synopsis was quick to pique my interest, though: Mexico City, political unrest, a vanished neighbour with a secret and a hired thug with a thing for rock ‘n’ roll. The mix of different elements alone would have been enough to grab me, but some of my favorite books have been those which set me down in a different culture, and I think it was the prospect of a visit to Mexico City more than anything else that decided it for me. That, and the rock ‘n’ roll.

Maite is a legal secretary; going to work, coming home, stopping by the newspaper stand for the latest Secret Romance. She’s never been lucky in love (so much so that her last relationship barely qualified), and her dealings with her family haven’t fared much better, but at least she has her records and her comic books.

Elvis doesn’t like hurting people. He doesn’t enjoy it like the guys he works with, but being a member of the Hawks doesn’t always give him a choice. He’s never wanted much but his records and a place to listen to them, but since becoming one of El Mago’s hired thugs he can’t help wondering what it would be like to live in a fancy apartment like the old man.

When the leader of his team is injured during a protest turned violent, Elvis finds himself tasked with retrieving a camera from a one of the students who was there. Easy enough, except it quickly becomes apparent that El Mago isn’t the only one with his eye on the camera. When its owner goes missing, he’s forced to dig deeper, delving into the group she was part of and investigating her old haunts, all while keeping an eye on the last person to see her: the quiet little secretary who lives across the hall.

I’ve said it before – I love it when a story teaches you something. Living in Africa, I wasn’t taught about the Corpus Christi Massacre or the deadlier Tlatelolco massacre which preceded it, but it was during the Corpus Christi protest that a group of thugs-for-hire known as the ‘Halcones’, or ‘Hawks’, swarmed the streets of Mexico City in order to forcefully dismantle the demonstration, leaving 120 people dead and more than 100 injured. It’s also during this protest in the book that the leader of Elvis’s group is injured and the incriminating photographs taken.

There’s an certain naivete  to Maite I couldn’t help but like – forever imagining herself in the romances she reads, until  she finds herself caught up in one and doesn’t know what to do. This doesn’t make her a pushover, but it does leave her ill-equipped to see the people she meets for who they are instead of the idylls she dreams up for them. There’s innocence in Elvis as well, but it’s been so worn down by the life he’s lived that it’s barely there. Still, he’s a likable rogue, and without giving anything away I spent a good deal of the book rooting for him to hook up with Maite somewhere along the way. Given all the elements, they seemed made for one another.

The author’s prose is easy to read, and the characters are varied and relatable. I’ve never been one to complain about explicit descriptions of violence, but I especially liked the way the action in the book was handled without the need to describe every bullet hole and incision. There were times it felt like an old black and white mobster film, with Maite making a sweet counterbalance to the cloak and dagger. The story is probably just a tad longer than it needs to be, though I can’t really say this hampered my enjoyment of it. Mostly, I wanted to see what happened with Maite and Elvis.

Overall, I was left glad that I’d picked up Velvet Was the Night. Solidly written and wonderfully atmospheric, by turns cutthroat and sweet, I’m really looking forward to reading more of Silvia Moreno-Garcia’s writing. Especially given that there’s so much to choose from.