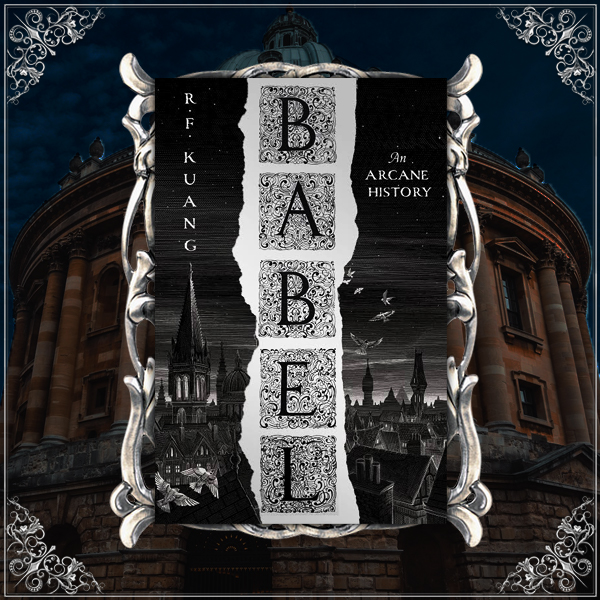 I haven’t had the pleasure of reading R.F. Kuang’s The Poppy War series. Having just powered through Babel, her latest offering, I could kick myself now for not falling into her books sooner.

Babel: An Arcane History of the Oxford Translators’ Revolution is, for the most part, the story of Robin Swift. Orphaned in 1828 as cholera sweeps through the city of Canton, he finds himself rescued from the brink of death and spirited away to London by the mysterious Professor Lovell: there to be tutored in preparation for his eventual enrolment in Oxford University’s Royal Institute of Translation (or, simply, Babel).

For it is silver that makes the world go round – bars of silver imbued with a magic that does everything from keeping buildings upright to running carts through the streets of London. Though no one can pinpoint its exact nature, the crux of the force lies in that space between the translation of one language to another: the mysteries of which reside firmly in the halls of the Institute. As such, its members enjoy pre-eminence among their peers, while its learners are afforded a certain reverence among the student body, held in awe for abilities they might one day possess.

Robin’s studies at Oxford represent a time of freedom and joy in the company of friends he loves. An academic utopia, until the night he encounters a gang of outsiders making off with the Institute’s silver, and discovers the existence of a secret organization working to sabotage the translators’ work. For silver powers not only carts and walls and a thousand other little aspects of daily life, but also the gears of colonisation, and before long Robin will be forced to make a choice between contributing to the machine of oppression or siding with his homeland against the empire’s tyranny.

I’ve said it before, and I’ll say it again: I love a story that teaches. According to the author’s bio Kuang herself is a translator, with degrees in Chinese studies from both Oxford and Cambridge and a third currently in the works at Yale. The intelligence of her writing is simply glorious, making for a story that’s as compelling as it is insightful: a combination that worked to drag me almost bodily into the tale and keep me basking in its embrace long into the night.

It’s so refreshing to come across a system of magic unlike anything you’ve read before, especially one that fits the setting of the story so well. Kuang’s descriptions weave a spell that’s impossible not to fall under, immersing you in her world so thoroughly that you can almost smell the books and feel the rain as Robin and his cohorts traverse Oxford. The different nationalities in his circle make for a wonderfully diverse group, and by the time they’d reached their second year I think I cared about them almost as much as Robin did.

Sadly, given the reality of their place in the empire’s schemes, it couldn’t last. Once the trouble hits, there’s no going back, and all you can do is watch in horror as everything tears apart and the ugly truth comes spilling through. From start to finish, Babel is a novel masterfully plotted and packed with enough detail to keep you thoroughly enthralled the whole way through. If the mark of a good story is to leave the reader wanting more, this one succeeds in spades.

“Fairy Tale” Is Stephen King At His Inventive Best