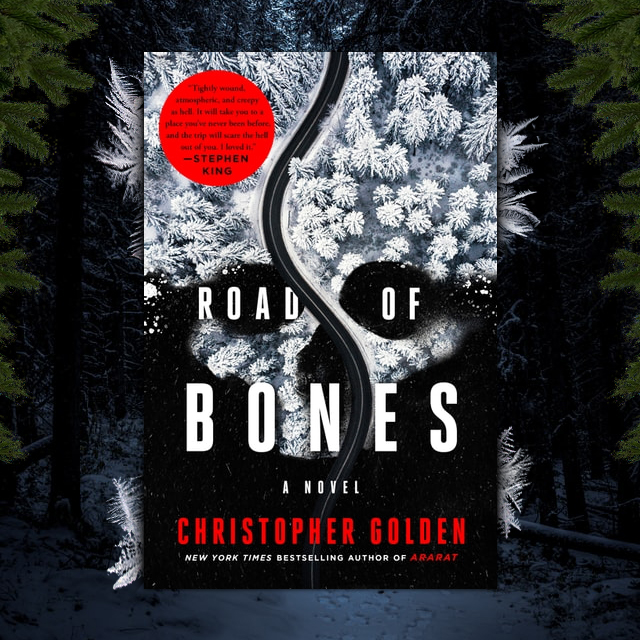 “So, here they were. Teig and Prentiss on the Road of Bones. What were friends for, if not to risk their lives together?”

Road of Bones author Christopher Golden has written a lot of books. Take a look at his online bibliography, and the word prolific can’t help but spring to mind. A writer of horror, fantasy and suspense, he’s worked on Buffy the Vampire Slayer novels, written with the likes of Tim Lebbon and Charlaine Harris, and worked on the script for the recent Hellboy reboot. That’s just to name a few of his accomplishments.

His latest takes place on the infamous Kolyma Highway in East Russia. Built between 1932 and 1953, it’s estimated that the bones of between 250 000 and 1 000 000 political prisoners who died in its construction lie buried beneath or around the road. The highway also passes through the coldest inhabited place in earth, with temperatures dropping as low as -50°C in the heart of winter. Between this and the name of the road, it’s not hard to see why Golden fell in love with it.

Felix Teigland’s documentaries have tended more towards misses than hits. Down on his luck again, he’s in search of the next big thing when he learns of the communities living in the bitterly cold outback of Siberia; a region that frequently records the lowest temperatures outside Antarctica. Excited at the prospect of documenting something no one has ever seen, he ropes longtime friend, Jack Prentiss, into a meeting with local guide Kaskil, before the three proceed down the mostly deserted highway to Kaskil’s hometown, Akhurst.

But something has happened in Akhurst. All of the houses are empty; doors hang open, footsteps form paths in the snow to the cold, black woods. At first it seems that the only life left in the area is Kaskil’s nine-year-old niece, found hiding in her room, until the trees begin to sway and the things in the woods start to emerge.

The setting for this story couldn’t be more perfect. Dark and secluded, punctuated by small, isolated settlements, the Kolyma Highway on its own feels like something out of a nightmare. At temperatures of -50°C in winter, an accident or a simple breakdown can mean freezing to death in your car. Throw in a million bodies buried beneath the asphalt, and you’ve already got the makings of a great horror story.

The monsters and creatures alone are enough to justify reading this book. Golden expertly blends folklore with biological horror to create some of the more freakish abominations to emerge from the genre in recent years. The story does seem to drag a bit until they arrive – there’s not much to see on a road surrounded by snow, woods and shadow – but they’re well worth the wait. Take Adam Nevill and throw in a touch of Graham Masterton, and you’ll have some idea of what you’re in for.

The relationship between Teigland and Prentiss takes awhile to get into. Some of the backstory descriptions feels better suited to the planning phase of the writing process than to the story itself, but once you find the rhythm the story moves quite briskly. As soon as the group reaches Akhurst, it’s a matter of holding on tight and praying there aren’t any bumps in the road ahead. It’s been a long time since a book frightened and exhilarated me the way that this one did, and I have a feeling I’m going to be searching for its equal for quite some time to come.