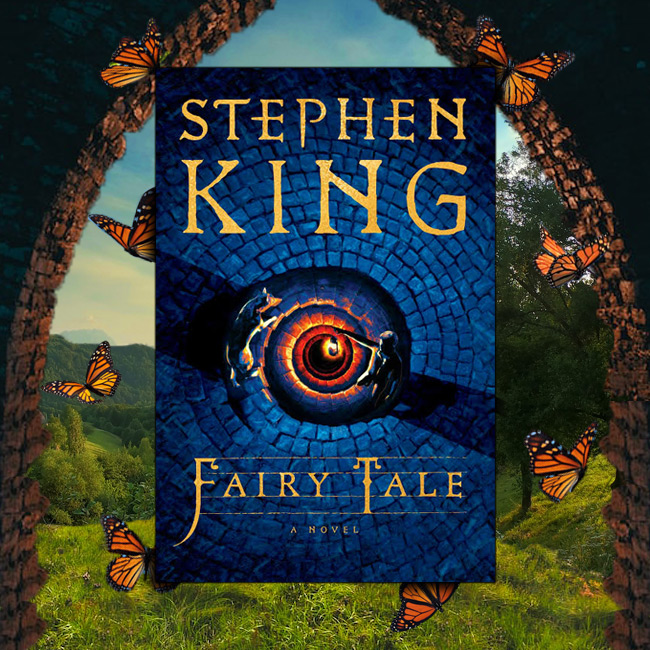 Fans of Stephen King will already know that when it comes to worldbuilding, the man is no slouch.

From the strange Territories of The Talisman (co-authored with the late, great Peter Straub) to The Dark Tower’s Mid-World, King has been weaving realities for longer than some of us have been alive. Given his reputation as a master of the macabre, it’s easy to overlook the fact that the guy’s also a pretty decent fantasy novelist (among other things). Ask any Stephen King fan, though, and they’ll be happy to tell you all about Roland and his ka-tet, or Travelling Jack and the quest to save Queen DeLoessian.

With Fairy Tale, King again wraps us in regions strange and fabulous, though you’d be forgiven for thinking that these feel vaguely familiar.

Charlie Reade is an all-American seventeen-year-old boy living with his widowed father in Sentry’s Rest, USA. When neighbourhood curmudgeon Howard Bowditch takes a fall off his ladder, it is Charlie who hears the man’s dog howling from the back yard and calls for an ambulance, offering to look after Bowditch’s dog when it becomes obvious the man has no one else to ask.

What starts out as a grudging acceptance of the situation gradually transforms into an unlikely friendship as Bowditch’s recovery takes longer than expected, with Charlie popping in regularly to keep an eye on him as he mends. Even then, it takes another tragedy for the old man to confide in Charlie about the shed at the bottom of his yard: a shed which covers over a stairway to a world called Empis, where something unimaginably evil has taken root.

The book has Fairy Tale on the cover, but I feel as if Wonderland might have worked just as well for a title. The overall sense is of a meeting between Grimm, Anderson and Carroll, with the addition of a long road and a distant, gleaming city throwing something of The Wizard of Oz into the mix. Where King’s Dark Tower series was a combination of spaghetti western, science fiction and fantasy aimed firmly at the grownups, Fairy Tale feels like a soup made from the stories that most of us grew up with; albeit with a healthy dose of pepper and a couple of toes bobbing on the surface!

King’s ability to create characters you fall in love with has always been one of his strong suits, and it’s on full display here.

This also makes them hard to leave once all is said and done, and I couldn’t help but experience a pang of bittersweet sorrow at having to say goodbye to the people of Fairy Tale. The land of Empis grows steadily darker the closer Charlie comes to its terrible heart, but the people he meets along the way make for a comforting series of lights to keep him going. So much so that by the end of the tale you don’t want him to return to his normal life. The world itself is strange and fantastic, but as with most of King’s stories it’s the characters that ultimately reel you in and keep you reading until the bitter end.

Utterly enchanting, Fairy Tale is Stephen King at his inventive best. This is a story for every kid who ever dreamed up another world at the bottom of their garden, or spent nights tucked up in bed with someone reading to them. The sights are strange and the way dangerous, but in the end you wouldn’t want to miss the journey for anything.

R.F. Kuang’s “Babel” Is As Epic As It Is Ingenious