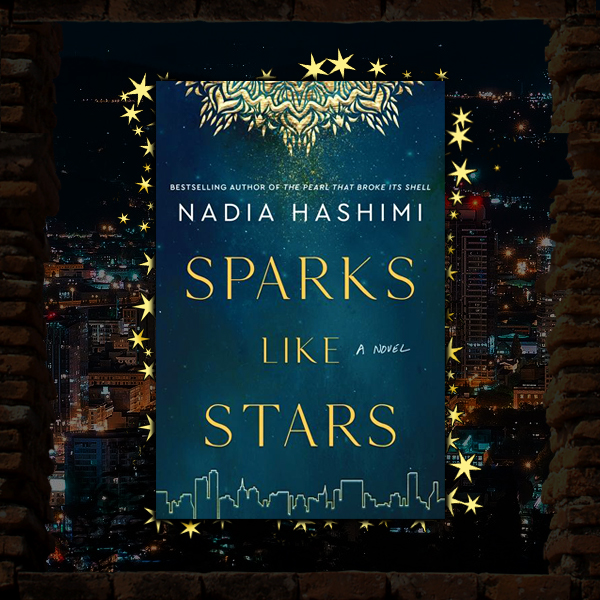 I’ve been a Nadia Hashimi fan since the release of her first book, The Pearl That Broke Its Shell. Her stories are so thoroughly engrossing that she’s one of those authors whose books I pick up without much thought, certain that I’m going to be carried away by whatever she writes.

Frequently set in Afghanistan, her novels show up facets of the country often lost behind the smoke of war and terror, shining a light on the everyday life of the people living on the ground. Spanning thirty years and two continents, her latest offering, Sparks Like Stars, is one of the most affecting books I’ve picked up this year, and counts as possibly her best work date.

In 1978 Mohammed Daoud Khan had been president of Afghanistan for five years, having overthrown the monarchy in 1973 to establish the country’s first republic.

On the night of 27 April 1978, a coup d’état led by the Soviet-backed People’s Democratic Party of Afghanistan attacked the presidential palace where Daoud and his family lived, killing nearly everyone there and installing a new government under the leadership of Nur Muhammad Taraki (more on the Saur Revolution here).

With her father positioned as one of Daoud’s most trusted advisors, Sitara has grown up with the palace as her playground and the president’s grandchildren as her closest friends. She is ten years old on the night that Soviet-backed forces attack the palace and kill the president and his family, her own family slaughtered as the soldiers go from room to room gunning down survivors.

Badly traumatised, she is smuggled from the palace by one of the guards, who manages to place her in the care of Antonia, an American diplomat working in Kabul. Realising that the girl is not safe in the country anymore, Antonia works to smuggle her to the States where she can formally adopt her and start the process of helping her heal from her trauma.

Thirty years later, Sitara – or Aryana, as she’s now known – is a renowned surgeon living in New York. When the guard who took her from the palace that night shows up as a patient in her examination room, his presence reopens the wounds she’s come close to healing, dredging up questions that have plagued most of her life. Realizing she’ll never put the past to bed without facing it head-on, she sets off for Kabul to re-examine the traumatic memories of her family’s murder, daunted by the prospect of what she might find.

My heart still aches for Sitara, and for any child forced to endure the sort of trauma she went through.

It’s one thing to see it on the news, but to be confronted with the emotional and psychological damage that survivors are forced to live with for years instils a respect for these people like no other.

Nadia Hashimi has one of those wonderfully lyrical writing styles that you just want to keep reading. I’ve always found it easy to fall into her books, and the opening of Sparks was no different; a  foreboding glimpse of things to come before we join Sitara and her friend in the presidential library, spying on dignitaries from a window. Her childhood is painted with such innocence that it makes the murder of her family and friends that much more gut wrenching, and I found myself sitting with a knot in my stomach for most of those scenes, hoping upon hope that the next page would offer a different fate. Tragically, to no avail.

Fortunately, it isn’t all so grim. Antonia’s mother, Tilly, is one of the sweetest characters that Hashimi’s ever written. I feel as if a lot of people have probably known a Tilly at some point in their lives – one of those eccentric theatre personalities with their head ever-so-slightly in the clouds and an aura of calm that follows them like a portable sunbeam. After the events at the palace, Tilly was like a balm on my frayed nerves, and Sitara’s too as she struggled to process what happened. I’m not sure what state either of us would have been in without her presence to ease things a little.

As with the author’s other books, Sparks offers not only a gripping narrative but a fascinating look at the cultures and history of Afghanistan. You also get a sense of what life is like for refugees forced to abandon their communities and everything they know for countries that are alien and frequently unforgiving to foreigners. In a world where more and more people are being displaced by war and poverty, books which place the reader in a culture different from their own have a large part to play in bridging gaps and fostering understanding. The fact that they’re often impossible to put down doesn’t hurt at all.

‘The Appeal’ Twists And Turns And Never Lets Up