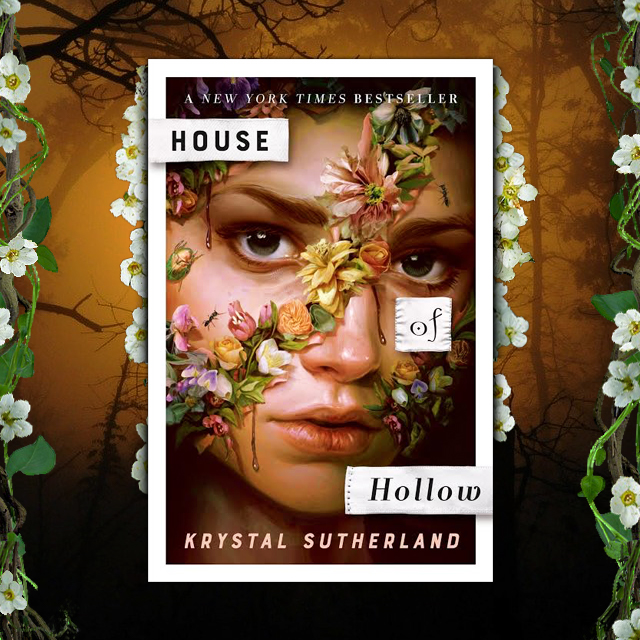 Krystal Sutherland’s first book, Our Chemical Hearts, was voted one the best debuts of 2016 by The American Bookseller Association.

The book garnered enough attention to entice Hollywood to the table, with a film adaptation out last year via Amazon, while her second novel currently holds a respectable 4.04 rating on Goodreads. House of Hollow is her third book.

Originally from Australia, the bio on Sutherland’s website states that she has lived on four continents and currently calls London home. Though I haven’t had the pleasure of sampling her earlier work, House of Hollow has to be one of the most deliciously dark and twisted tales that I’ve read in a very long time.

Ten years ago, Iris Hollow and her sister vanished from under their parents noses on a quiet lane in Edinburgh.

The search that followed went on for a month, with no trace of the girls found anywhere until the night they were discovered huddled together on the same sidewalk they’d disappeared from, naked and afraid and unable to say what happened.

Whatever happened to them while they were gone, it changed them. First their hair went white, then their eyes turned black. They eat and eat and eat, but never gain any weight. They possess an intoxicating allure which makes people behave strangely around them; a trait which Grey, the eldest, has learnt to use like a siren’s song, forever shifting the odds in their favour.

To Iris it seems her sisters have embraced the strangeness that has followed them since that night, whereas she’d like nothing more than to carry on with her life as if the incident never happened.

Ten years later, Iris is seventeen, trying to fit  in at a school where her and her family are the stuff of myth. Though her sisters have left home – Grey’s House of Hollow is one of the biggest brands in fashion, while Vivienne is the bass guitarist in a band – the three are as close as they ever they were as children. When Grey goes missing, Vivi and Iris are left to pore over the preceding days, digging deeper into the frighteningly weird and unnatural as they stumble along a path that leads back to Edinburgh and that missing month.

I loved the creep factor in this story. From start to finish there’s an eeriness just below the surface that bubbles through more and more the closer the reader gets to the truth of what happened to the Hollow sisters.

There were a lot of instances where I couldn’t put it down, and times where I found myself rushing through whatever I was doing just to get back to it. I loved everything about Iris, from the way she worries about her mother to her desire for normalcy. She’s aware that there’s something not quite right about her, and that everyone knows she isn’t normal, but she hasn’t let it stop her from getting on with her life.

Most of the characters stand out in some way or another, whether it’s through their personality, sense of style or their unsettling peculiarity, making for a delightfully vivid read that’s incredibly easy to get lost in. Truth be told, I didn’t want it to end, and though there’s no talk of a sequel I’d love to know what happens next with these people.

The truth is handed out in delicious little crumbs, just enough to keep you thoroughly hooked until the final shattering revelation. I’ve read a lot of weird fiction, but this one had me tense and on the edge of my seat for most of the second act, eventually barreling toward the end like a starving person chasing a rogue hen down a hill. The weirdness gets under your skin, and the plot as a whole feels wonderfully original. Although it’s marketed as a young adult read, I’ve read adult fantasy that doesn’t come close to what the author’s managed to capture with this. Wonderfully unnerving.

“Fairy Tale” Is Stephen King At His Inventive Best