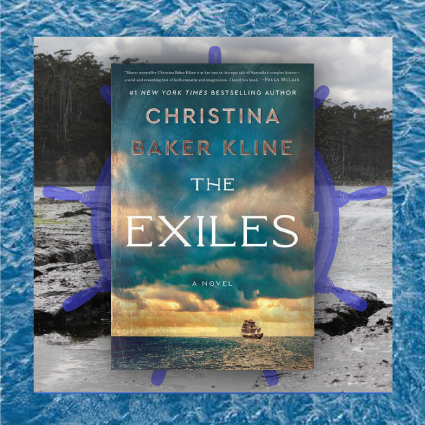 I discovered Christina Baker Kline with the release of A Piece of the World and, having been mesmerised by Tracy Chevalier’s Girl with a Pearl Earring a few years prior, was initially enticed by the prospect of another story built around a famous painting. Her previous novel, Orphan Train, had done well among the book clubs, and in A Piece of the World I was delighted to discover a story which seamlessly weaved fact and fiction into something poignant and rather luminous, inspiring a fondness for a painting which, if I’m honest, had barely registered on my radar before.

Had I never come across that book, the synopsis for her latest would have likely elevated it to the top of my pile in any case. A young woman misused for her naivety and punished for the consequences. Three women fighting for freedom and redemption in nineteenth-century Australia. Add to this a native people dismantled and displaced by the spreading stain of colonialism, and you can already feel the outrage setting fires in your chest.

The Palawa people are estimated to have come to Tasmania more than 40 000 years before the first colonists arrived on their shore. At the outset of the island’s colonisation in 1803, it was home to approximately 3,000 – 15,000 native inhabitants (according to Wikipedia), though local tradition holds that their numbers were more numerous than this. By 1835 that figure had dropped to around 400 souls, the majority imprisoned in camps where the arrival of foreign diseases whittled their numbers down even further. Just twelve years later, estimates place the number of full-blooded Palawa at barely 47.

Mathinna is eight-years-old when Governor John Franklin and his wife, Lady Jane, visit the small island to which her tribe has been exiled. Though the daughter of the chief, and accustomed to attention, when she catches the eye of the governor’s wife she cannot know that her future is about to take a wrenching detour – one that will carry her to the governor’s house in Hobart Town to serve as plaything for Lady Jane. Stripped of her culture and the remembrances of her tribe, she must shape herself to the mould into which she is poured or risk being discarded at the orphan school in Hobart, a fate almost akin to a death sentence.

Evangeline knows little of the world’s dark side. Sheltered all her life by a loving father, when his death forces her from their home she must take work as governess to the Whitstone children in northwest London, where her learning makes her a pariah to some and an attractive prospect to others. Seduced by the family’s eldest son, fate seems poised to make amends for her heartache, yet when she is accused of a theft she didn’t commit she finds herself banished without ceremony to Newgate prison, pregnant and alone in one of London’s most depraved corners.

What follows is an endless wait in an overcrowded cell as the courts grind their way toward her; days buoyed only by the hope of a salvation which never comes. Packed at last aboard a vessel bound for Australia, locked in the ship’s stinking bowels to weather long nights in the dark, she befriends Hazel, a girl sentenced to transportation for the heinous crime of stealing a spoon, whose talents as a midwife and herbalist must be put to use as the baby’s arrival nears. But as their voyage draws to a close and the situation on board grows dangerous for both women, fate stands ready to deliver perhaps the cruellest blow of all.

From page one, these are characters you can’t help but feel for. This can only be attributed to Kline’s writing and her clear love for these women, although the knowledge that we aren’t dealing purely with fiction works to wring an added sense of heartache from events, eliciting a shade more colour from an already vivid landscape. It’s empathy that draws you in and demands investment, the constant hope that some form of happiness lies on the other side of what these women are going through, while Kline’s prose makes for a world where the scuttling of fleas and the stink of the orlop seem to haunt the back of your neck and inspire the faintest nausea in the pit of your stomach.

The notion of a woman’s fate as something she might stake only a weak claim to provides a bitter catalyst for the hardship that drives this tale. My synopsis doesn’t come close to encapsulating the adversity and injustice faced by these women for their ‘crimes’, and while it is difficult to be reminded that this was in fact the order of the day there is that steely vein of strength in their suffering which commands our admiration and makes each victory, no matter how small, that much sweeter. It’s there in their fight, their unshakeable hope and their ability to adapt to the most appalling circumstances, and serves as a rallying cry for those following them page for page into the unknown, rooting for them every step of the way.

My knowledge of Australian history wouldn’t hold up under scrutiny, I’m afraid, and so it was only once I’d finished the book and read through the acknowledgments that I discovered Mathinna was real. If you’re debating whether or not to invest in this story, and need another nudge in the right direction, read it for her. From what I’ve discovered the character hews fairly close to the person she’s based on, and her story is so heartbreaking that it haunted me for days after I’d finished.

If I have one small complaint, it’s that the novel doesn’t leave us with more of a trajectory for Mathinna’s fate. Should you feel the need to delve a little further into her life, however, the books listed in the acknowledgments would probably prove a good place to start, although (he admitted sheepishly) what I was able to find online proved sufficient to satisfy my own curiosity.

The painting by Thomas Bock, the one with the red dress, can also be found online. Though there’s no denying the sweetness of her smile, knowing her fate lends it a sadness that’s impossible to ignore.