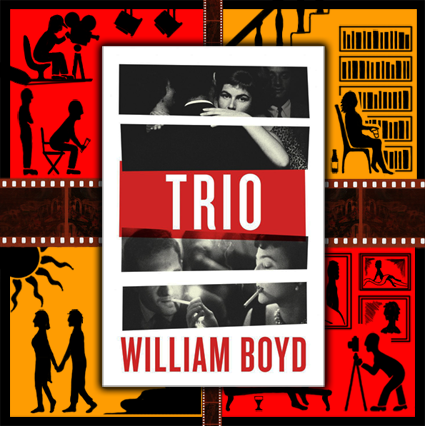 I love reading, but there are times when I hate deciding what to read next.

There’s just so much to read and so very little time; less when you’re juggling a job with a writing schedule, a social life and a family life worth having. There are books on my shelves purchased solely on recommendation or reputation which I’m embarrassed to admit that I still haven’t gotten around to. Classics I’ve collected which seem to glare at me accusingly each time I go by, to the point that I’ve started averting my eyes or checking my phone whenever I find myself in their general vicinity. I’ve tried drawing up schedules, being firm with myself, and ignoring reviews (which, let’s face it, is like a pack-a-day smoker trying to avoid the cigarette counter), all to no avail. Be it a gift or recommend or an out of the blue loan from a friend, there’s always something winking from the sidelines, some tantalizing newcomer promising wonders beyond anything I’ve encountered before.

Trio presented one of these dilemmas. I had it all lined up and ready for lift-off when a particularly appealing spanner introduced itself to the works, leaving me once again torn in two. It didn’t help that the book I was busy with was doing little to entertain, or that the chapter I was writing was proving a stubborn nut to crack. Like choosing between two decidedly delectable deserts, I was left staring at the menu while my imagination argued with itself over which would provide the most gratification – then arguing with my imagination when it couldn’t supply enough reason for its choice.

In the end I decided to go with my initial plan, with the proviso that I’d definitely get to the spanner next. I hope.

I purchased Trio based on how much I enjoyed Mr Boyd’s previous novel, Love is Blind. For anyone who hasn’t read Love is Blind, it’s now available in paperback (with a cover I personally prefer to the trade edition), so if you find yourself in particular need of entertainment for the never-ending days of lockdown or a long weekend at home, might I suggest you pick up both? The stories are quite different, and it’s not at all hard to see why the man has won awards for his fiction, received a CBE for services in literature, and been given honorary Doctorates in Literature from various universities.

Trio, as the title suggests, follows three people in 1968 Brighton, England, for the making of a film called Emily Bracegirdle’s Extremely Useful Ladder to the Moon. While each possesses a distinct persona, there’s a flip side hiding beneath which none of them are particularly eager to own up to even as events (as they will) work to nudge their secrets slowly toward the light.

With his classic suits and white hair, Talbot Kydd carries the distinguished air of his forebears, tempered by a geniality that tends to surprise most people.  As the producer on set, all decisions regarding Ladder to the Moon should pass through him, only his partner in London seems to be taking more and more liberties lately, both with Ladder and with other aspects of the business. Saddled with a director looking to reinvent himself, a leading man with demanding managers, actors who refuse to work together and the theft of film (to name just a few highlights), most days find him in near-constant motion as he deals with the myriad little fires that spring up behind the scenes of any moderate sized shoot.

To look at him, no one would guess that he owns a flat in Primrose Hill under another name, where his favourite pastime is photographing people in various states of undress. Not even his wife would guess that he has a talent for taking pictures, or that he tends to favour the male form more than he ever did the female, but then even with the recent changes to the law freeing people to love who they want, some secrets are rooted so deep that it’s best to leave them where they are or risk tearing everything apart.

There was a time when Elfrida Wing’s writing garnered rave comparisons with Virginia Woolf. That was ten years ago; a period during which she’s done little more than think up titles for books from behind a comforting haze of vodka and gin. Marriage to director Reggie Tipton (who prefers you call him Rodrigo these days) hasn’t shaped up to be all that she thought it would, thanks mostly to his roving eye and eternal absences, but it’s a zone she’s grown accustomed to existing in, and the travelling required for some of his films makes for a distracting change of scenery at least.

Alone in another studio house, the sudden arrival of real inspiration after so many years takes her by surprise, coaxing her into town with her first genuine sense of purpose in years. A novel based on the last day of Virginia Woolf seems like a guaranteed hit for the writer hailed as her literary successor, but after years spent chained to the bottle is she capable of recognising the changes it’s wrought before it’s too late?

On the other side of Brighton, Anny is getting ready for her next turn in front of the camera. Young, stunning and in demand, her growing dependence on pills for some form of normalcy is a secret even her agent isn’t in on, much like the affair she’s conducting with her charmingly boyish co-star. To the public her rise to fame is something out of a fairy tale, her relationship with French philosopher Jacques Soldat the stuff that golden Hollywood dreams are made of, while behind the scenes the demands of the job make for a side of her that few people get to experience.

Cornell is a speck in her rear-view mirror that she’d rather not look at; an unfortunate marriage at twenty-three that ended up being more trouble than it was worth. When he appears at her hotel on the run from authorities, however, she’s surprised to find her instinct to throw him out overshadowed by a pang of sympathy for the man. Agreeing to help him with the means to escape seems like the easiest way to make him go away; but if it ever comes to light she’s likely to find herself with more troubles than a couple of pills can scrub away.

I might have only had the pleasure of reading two of Boyd’s books at this point, but I’ve seen enough online to know that the enjoyment I found in them isn’t a fluke. His writing is so engaging that I get the feeling he could tackle just about any subject and turn it into a something entertaining, an ability that’s getting harder and harder to find in books today. When I was younger I went through a phase where I had to read everything by Sydney Sheldon that our library had to offer, and I found myself reminded of Sheldon at times while reading Trio; perhaps because my keenest memory of his work involves a sense of glamour that felt exciting and otherworldly to a young reader just getting into grownup stuff. At a time when a lot of us are stuck at home wondering when the world will open again, Boyd’s Brighton felt like a beach holiday surrounded by the sort of slightly off-kilter characters you can’t help but speculate about.

It seemed to me that each member of the trio could trace their problems back to that most familiar of demons: pressure. Elfrida drinks not only because her husband is a neglectful lout, but because the accolades heaped on her work have left her staring at the page like a deer in the headlights; her imagination held hostage by comparisons with Virginia Woolf. Anny pops pills to distract her from the unexpected demands that come with being the next big thing in Hollywood, while Talbot’s dalliance with capturing nudes stems from the constant need to play it straight in a society that won’t accept anything else. Part of this novel’s pull lies in people’s love for a good, old-fashioned gossip – especially when there’s a celebrity involved – though I think a larger portion has to do with the behind the scenes glimpses into the making of a film. Not only a prolific author, Boyd has also written numerous screenplays for film and television, and drawing from that experience paints a wonderfully detailed backdrop against which to tell his story. One of my favourite aspects of the book was watching the way that Ladder evolved as each unexpected bump in the road had to be surmounted, with even the biggest of catastrophes cleverly bypassed by a quick-thinking writer. In the end, I found myself wanting to watch the film just to see how it shaped up after everything.

It’s rare these days to find a story that doesn’t irk you just a little. Anny clearly wasn’t cut out for the Hollywood life and all the pressures it entails, but I was still hoping she’d make it further than she did, especially with the new man in her life. Elfrida’s story was pulling itself back together so nicely that I felt sure there was some great triumph lined up for her – if only a tad more comeuppance for that pretentious, philandering husband of hers. The ending ties itself up neatly and sensibly, but out of the three Talbot seemed like the only one to exit on a higher rung than when he started. While there were aspects from each that I found myself empathising with, Talbot was undoubtedly the draw card; though I can’t decide whether this is because he was better drawn than the others, or because he seemed to have so many more entertaining little subplots attached to him. Perhaps, in the end, he was simply the most likeable.