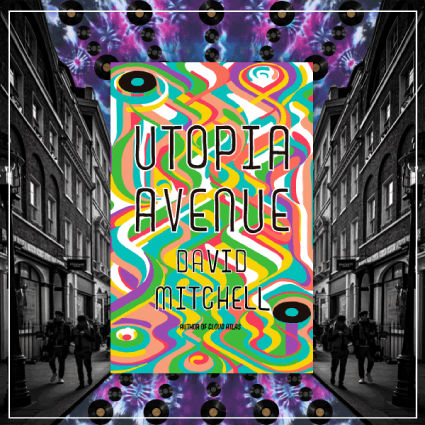 A fair chunk of the readers I met as a bookseller seemed to associate David Mitchell with a very limited selection of his work.

I recall recommending his books to people and being surprised when they’d never heard of them. Quoting any of his other titles likewise earned me blank stares or a mystified shake of the head, so I learnt early on to lead with Cloud Atlas and hope for the best, even if it was one of his works I hadn’t read. Selling a book on the merits of a previous bestseller isn’t something I’m fond of (I’m sure we’re all familiar with the fly in that particular sweet jar), but Mitchell is one of those cases where I’m happy to make an exception. I have yet to come across a novel I didn’t enjoy.

You have to take into account that I first fell in love with these stories in a town that isn’t nicknamed Sleepy Hollow for its association with Ichabod Crane or the village in New York. While our store had a science fiction and fantasy section, it was just that; a single, small section which combined both genres into an amalgam that saw about as much traffic as Chernobyl. Book clubs and schools were our bread and butter, but while the latter might take the occasional strange tale the former tended to avoid them like a plague (if that idiom still has any meaning).

David Mitchell is by no means a small name. In a community ruled by the likes of Jojo Moyes, Lucinda Riley and Lee Child, though, expecting everyone to know him was probably wishful thinking on my part.

I was so excited to catch wind of another project, and more excited when I read the page count. I love a good story of any shape or size, but there’s something about a hefty volume of fiction that makes me especially happy, particularly when it’s by an author I adore. Coming after books like The Bone Clocks and Slade House, which both had such dazzling covers, I found the choice of imagery in this case a little underwhelming, especially considering the era in which the story takes place, but then I didn’t come for the cover. I came for the magic inside.

Dean’s luck hasn’t ever given him much to celebrate. Recently ejected from his band and his boarding house, he’s on the verge of packing it in when he meets Levon Frankland, a novice manager with his eye on putting together something big. When Dean agrees to accompany him to the 2i’s coffee bar in exchange for a place to stay, he doesn’t realize he’s been offered a reprieve, or that he’s already being woven into something that will change the rest of his life.

Jasper’s not always socially adept, but he handles his guitar like a demigod. With his demons packed safely away in the Netherlands he’s managed to make something of a life in London, but when his band implodes during a performance at the 2i’s coffee bar circumstances force him to improvise with their drummer Griff and a bassist from the crowd, or face a roomful of disgruntled patrons.

When the three accompany Levon to watch a recently solo Elf Holloway – doyenne of the folk scene and Hammond organ ninja – perform at Cousins, the deal is practically in the bag.

This is no quick ride to fame, though. Put a jazz drummer, a blues bassist, a folk singer and a guitar god together in a room, and it’s going to take some shifting to make the pieces fit. But Levon has a plan, and in an era where just about anything goes a band with a bit of a difference might just be what everyone’s waiting for.

Mitchell has this wonderful talent for crafting characters who don’t behave like you expect them to. I suppose any writer worth his salt has to be able to forge personalities that seem reasonably believable, but these are characters that manage to surprise just when you think you have them figured out, something that keeps them fresh and intimately relatable. The celebrity cameos scattered throughout the book make for a glittering cross-section of the era, and anyone who’s watched an interview with Bowie or Lennon can attest that the author manages to impersonate each of the luminaries who make an appearance to believable effect (a chance meeting with John Lennon makes me grin each time I think of it).

Another thing I love about Mitchell’s writing is how he manipulates your mind’s eye in a manner that feels almost cinematic at times, as if your imagination is a camera being directed by a very skilled, very exact cameraman. The story shifts from character to character constantly in a manner that isn’t always strictly linear, so that at times you might start at a situation’s outcome before being given a backstory which took place elsewhere, while little character anecdotes and side stories make for a ride that’s anything but dull. The ability of the author to steer the reader so deftly through such a wide, complex, densely populated landscape is frankly enviable, and the ease with which the story flows made for many a late night spent happily engrossed in this world.

There’s so much to like about this novel. There’s the grungy clubs where you can almost smell the cigarette smoke and spilled beer. There’s the love stories – some of which feel unfairly short, while others become a bigger part of the enjoyment that keeps you reading. There’s the dark little detours that seem to slip between your ribs and stop your lungs, followed by moments that you can’t help but smile at (bone spurs – that’s all I’m saying). Jasper’s trouble reading expressions and social cues, Griff’s glorious accent; all of it folded into the flamboyant, contentious, excessive, psychedelic, rocking, revolutionary tumult of the 1960s.

David Mitchell has created one of the most fascinating and, at times, chilling metaphysical universes throughout the course of his fiction, and I was thrilled to find characters and connections from previous visits popping up when I least expected them. In the end, though, if I was tied up and forced to pick the single most endearing aspect of this book, it would have to be Utopia Avenue themselves. I loved these characters; loved watching them laugh, bicker, labour and fight for what they want. After a couple of hundred pages spent in their company you almost feel as if you’re part of the family, which only makes the ending so much more achingly bittersweet.