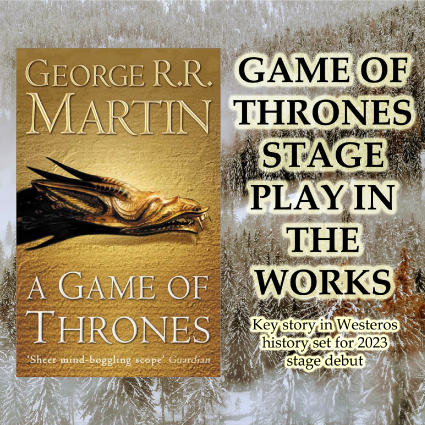 Denizens of Westeros, dig out your lances and fasten your helms.

According to several outlets, George RR Martin is in the process of developing a Game of Thrones stage show for Broadway. While most of us are still holding on for the long, long anticipated release of The Winds of Winter, any reason to return to the land of Lannisters, Starks and Targaryens  is generally reason to rejoice, though one hopes the author gets around to finishing the next book sometime in the not too distant future.

The show is set to debut on Broadway, West End and in Australia sometime in 2023, and will take place during the Great Tourney at Harrenhal: a contest that took place 16 years before the first book, and which served as a catalyst for the rebellion that ended Targaryen rule. Martin has also hinted that the play will feature many of the series’ most well-known characters, as well as the trademark blend of love, lies and vengeance that have kept readers and viewers loyal to the books since they debuted 25 years ago.

Given the recent success of The Cursed Child, this has the potential to be amazing. On top of this, Martin has apparently signed on for a Game of Thrones prequel with HBO, set for a 2022 release. Whatever the reason for the delay in Winter, he’s making sure that the wait is anything but dull!